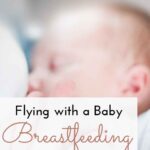 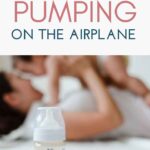 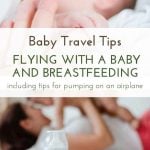 We’ve all read horror stories of airline or TSA representatives not being familiar with the rules for breastfeeding on a plane, like asking a breastfeeding mother to nurse in the lavatory or check her pump. While I can’t promise that no one will hassle you, here’s how to prepare as best you can so you have the smoothest experience pumping and breastfeeding while flying with a baby.

Breastfeeding on a Plane – Can you Nurse in your Seat?

In the vast majority of cases, yes, you can nurse your baby in your seat on a flight, at any time during the flight. Be aware that each airline has their own policy about breastfeeding on a plane.

Airline Policies for Breastfeeding on an Airplane

American Airlines, Lufthansa, Ryanair, British Airways and Air France are silent on their rules for breastfeeding on their flights.

If your airline is not listed above, simply Google the name of your airline + “breastfeeding policy.” Usually, it will be posted on their website, and you can print it out to bring with you.

What if I Need to Pump on a Plane? Can I Pump in My Seat?

In most cases, yes you can pump on a plane. The easiest place to pump on is in your seat, and most airlines will allow it. (Again, it’s a good idea to print out their policy before you leave).

Most of the time, because the plane is so loud and everyone is facing forward with earbuds in, most people won’t notice you or know what you’re doing. Sitting in a window seat will give you the most privacy to pump on an airplane, but that’s obviously not always possible.

7 Tips for Pumping on an Airplane

Don’t forget to check out our best airplane activities for babies and toddlers and these baby travel essentials!

Carry on Your Breast Pump

Even if you’re not planning to use it on the plane, you should always carry on your breast pump. It’s a medical device, it’s expensive, and for many women it’s not something that you can go days without if it gets lost. Additionally, you never know if your flight will be delayed and you’ll be on the plane longer than you planned.

Since it’s a medical device, most airlines will not count a breast pump as a carry-on, but again, make sure to check the policy.

There are a few different ways to fly with breast milk. In most cases, It will make the most sense to carry the milk on in a small breastmilk travel cooler.

How many ounces can you take on a plane? Breast milk is a “medical liquid” that you are allowed to bring on flights in “reasonable quantities.” It’s a good idea to print out the TSA breastmilk rules from the website before you leave, and just make sure to tell your airport security screener that you have breast milk with you.

If you have a long flight, the flight attendant may be able to provide you with ice to put in your breast milk cooler bag to keep the milk cool, but they usually won’t be able to store it for you.

However, if you’re traveling with a large quantity of frozen breast milk, some moms have had success checking breast milk in a cooler like this one.

Other Pumping & Breastfeeding Gear to Carry On

You should also carry on anything that you’ll need to nurse or pump during the flight. Some of these things might include:

Other Breastfeeding & Pumping Gear to Put in Checked Luggage

Anything that you don’t need on the flight and that would be easy to replace if lost – like a boppy pillow or nipple cream – can be put in your checked luggage.

Again, the key for breastfeeding on a plane is to be prepared! Make sure to print off your airline’s breastfeeding policy along with that of the TSA, and double check to make sure you’ve packed everything you need for pumping and breastfeeding while flying in your carry on bag and in your checked luggage. And have a great trip with your baby!

Thank you to Amanda of Exclusive Pumping for this guest post!

Amanda Glenn writes about exclusively pumping breast milk at Exclusive Pumping. You can also find her on Instagram or Pinterest.

Shop our entire list of breastfeeding and pumping accessories for travel with a baby!