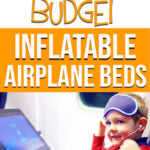 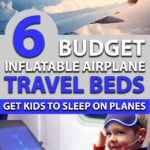 Once you’ve paid for your flights, hotel and budgeted for all your activities there might not be much left over for extra toddler travel gear, like an inflatable airplane bed for toddlers and kids.

Or you might be feeling unsure about how well your toddler will sleep on one of the airplane beds for kids. Nobody wants to spend a bunch of money and haul something that they don’t use.

It may also be that your airline hasn’t fully approved the use of airplane travel beds for kids and have left it up to the discretion of the crew. Which means you might not get to use it.

Perhaps you don’t think you’ll use it more than this one time flying with a toddler.

While I do think it’s worthwhile to splurge on one of these best toddler travel beds for planes, we also understand why this might not be the right choice for your family. For that reason, we’ve put together this list of budget airplane travel beds for babies, toddlers and kids.

These aren’t just a group of random inflatable travel footrests for the airplane. We’ve combed through all the data to determine which are the most popular with our Baby Can Travel audience and read through hundreds of reviews to find the best inflatable airplane travel beds for kids under $50.

How are the Budget Inflatable Airplane Beds Different Than the Premium Versions?

There are several differences between these more cost effective airplane travel beds for kids and a more expensive inflatable airplane bed for toddlers.

The biggest differences are quality and price. The price is higher, but so is the quality in the brand name inflatable toddler flight beds. You’ll see far less complaints about the inflatable cushion becoming deflated during the flight or getting delivered with a rip in it.

If you are using an inflatable cushion as an airplane bed for a baby, you really don’t want it to be deflating. We’ve owned our original Fly Tot inflatable airplane cushion since 2016, used it several times a year and have never had an issue with it deflating.

The shape of the premium inflatable airplane travel beds is also a big difference. Rather than just a cube, they are more mushroom shaped. The top is wider allowing it to have a better fit between your toddlers seat and the seat in front of them. It also give more options to fit it by flipping it upside down for flights with very limited leg space.

These budget inflatable airplane footrest are much less expensive, typically around $20, and will also take up less room in your carry-on luggage.

One final difference is the companies that you are buying your airplane bed for toddlers from. There are companies like Flyaway Designs who are working to get their Flyaway kids airplane bed approved by the airlines and that’s why you’ll see it approved by over 50 airlines.

You can buy the Flyaway Kids Bed directly from their website.

What are the Biggest Complaints about these Budget Inflatable Airplane Beds for Kids?

After pouring through all the 1, 2 and 3 star reviews, there were four main complaints.

1.      The bed arrived with a hole in it or it didn’t stay inflated. Either it a had tear or the seam was letting air out.

This was the same for each and every inflatable travel pillow we looked into. The only exception we found was the Wandering Tot which had no complaints about the airplane travel bed leaking over time or arriving with a hole in it. 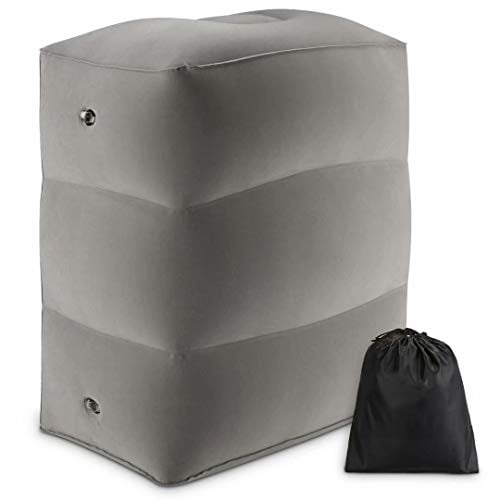 The Maliton inflatable footrest comes with either a basic travel cushion or a set of two travel cushions. The basic model has two chambers and two double cap valves, allowing it to (in theory) be used at 3 different heights.

One more budget inflatable toddler airplane bed, the HOMCA one has been a popular one with our Baby Can Travel audience for quite some time. It's fairly highly rated and reviewed as well.

It's dimensions are 18 x 16 x 10, so it's slightly smaller than the Maliton above. We like that the height is still 18 inches to make a flat surface when it's positioned next to the airplane seat. It packs down to about 6 inches by 4 inches and weighs less than one pound.

This one also has all the same great features, including a travel bag and two valves for easy inflation and deflation. You can also get an even better deal by purchasing the two pack. 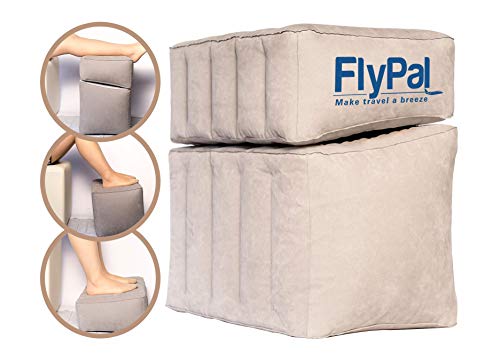 BEST FOR USING AT DIFFERENT HEIGHTS

The FlyPal inflatable cushion for air travel has the most unique design with two separate chambers that enable you to use it at 3 different heights. The two pieces are connected by velcro strips.

The air valves are double capped with one large and one small. The large one is used to inflate or deflate it in the quickest way possible. The smaller one is used to add more air or to finish inflating the pillow in place. 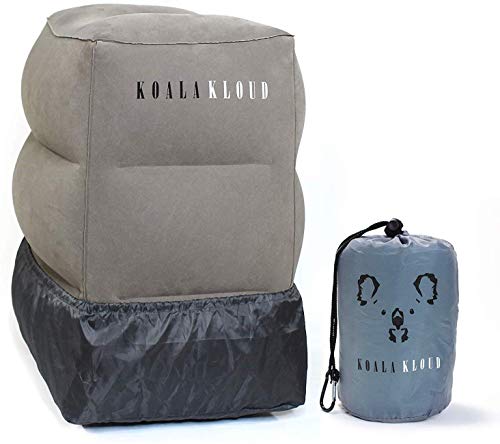 The Koala Kloud inflatable travel bed has a standard version and a premium version. The standard version has only one chamber and one valve, where the more expensive one has 2 chambers and two valves which allows you to use it with three different heights.

It comes with a drawstring carry bag and a dust cover to keep the base off the dirty airplane floor. 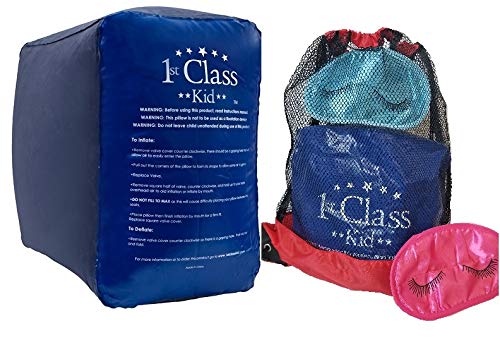 One of the original budget inflatable travel beds for airplanes is the 1st Class Kid Pillow. It only has one valve and one chamber. It does allow for the valve to be positioned at the top to make it easier to fill in place. 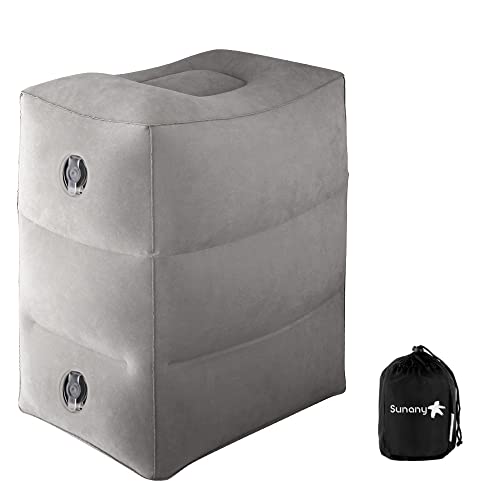 The Sunany inflatable travel bed for airplanes is the same size as the Maliton above. It can also be used at 3 different heights. It comes with a drawstring carry bag and a dust cover.

Like many of the inflatable airplane beds for toddlers, it has a 2-in-1 double valve to make it faster for deflating. 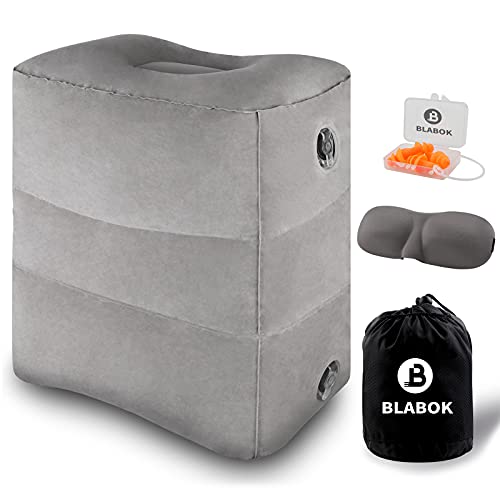 With 3 different heights and a travel bag, this inflatable toddler or kids airplane bed is a good budget option. It has a 2-in-1 double valve to make inflating and deflating easier.

There's really not much of a difference between these budget options. The only thing that changes is what's available on a given day. 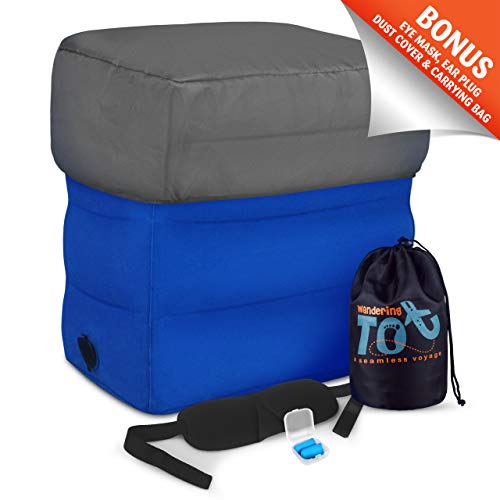 If you're looking for some additional value with your airplane bed, the Wandering Tot also comes with an eye mask, ear plugs, a dust cover and the carry bag.

It can also be used at 3 different heights and the company offers refunds for anyone who is refused by the airlines to use this inflatable travel bed for planes.

This one is an exception where there weren't any complaints about it being delivered with a hole in it. The better quality is worth double the price if you don't need to worry about it becoming unusable on your trip.

You can find all these and a few others in our Amazon Shopping list for Budget Inflatable Travel Beds for Airplanes.

What to Look for in a Budget Inflatable Airplane Travel Bed for Toddlers and Kids?

When looking to purchase one of these inflatable cushions for travel, check the dimensions of it. I would recommend getting one that is 18 inches tall by 18 inches wide and 12 inches deep. You’ll only need to inflate it to the point that it fills the space, but it will be far less useful if it’s too small for the space.

Aside from complaints about the inflatable airplane footrest being delivered with a hole or leaking after only a couple of uses, the biggest complaint is getting it to fit properly as a child airplane seat extender. There are several complaints about not being able to fit in the space once it’s inflated or that it moves around too much.

In the first instance, it likely has too much air in it to get it down onto the floor between the two seats. In the second, there’s not enough air in the toddler airplane bed.

You’ll get a better fit if you fill it in place. A pump will make this so much easier.

If you have two or more kids, this is a much more cost effective way to get two inflatable airplane cushions but be sure to read our tips for successful use of an inflatable cushion for air travel.

Can You Use an Inflatable Seat Cushion on the Plane?

Let’s just get this out of the way…. Some airlines have banned these types of products, even the premium versions. Check to make sure that isn’t the case for your airline. I read countless reviews from people that were surprised that they weren’t able to use them.

Check your airline first. I can’t stress this enough. Besides the airlines that have outright banned the use of an inflatable flight cushion for toddlers, other airlines only allow ones like the Flyaway Kids Bed and yet others leave it up to the discretion of the flight crew.

This is a risk you take. Take note of the companies below that allow a full refund of kids plane beds if your airline doesn’t allow you to use it.

Tips for Successful use of an Airplane Bed for Kids

Final Tips on Using an Airplane Travel Bed for Kids

These inflatable airplane beds for toddlers can be used from baby to kids around 7 years old, depending on the height of your child.

Inflatable toddler airplane beds have been more than worth it for our family, however your child won’t automatically go to sleep just because you have one.

Read all our tips for getting a toddler to sleep on the plane. 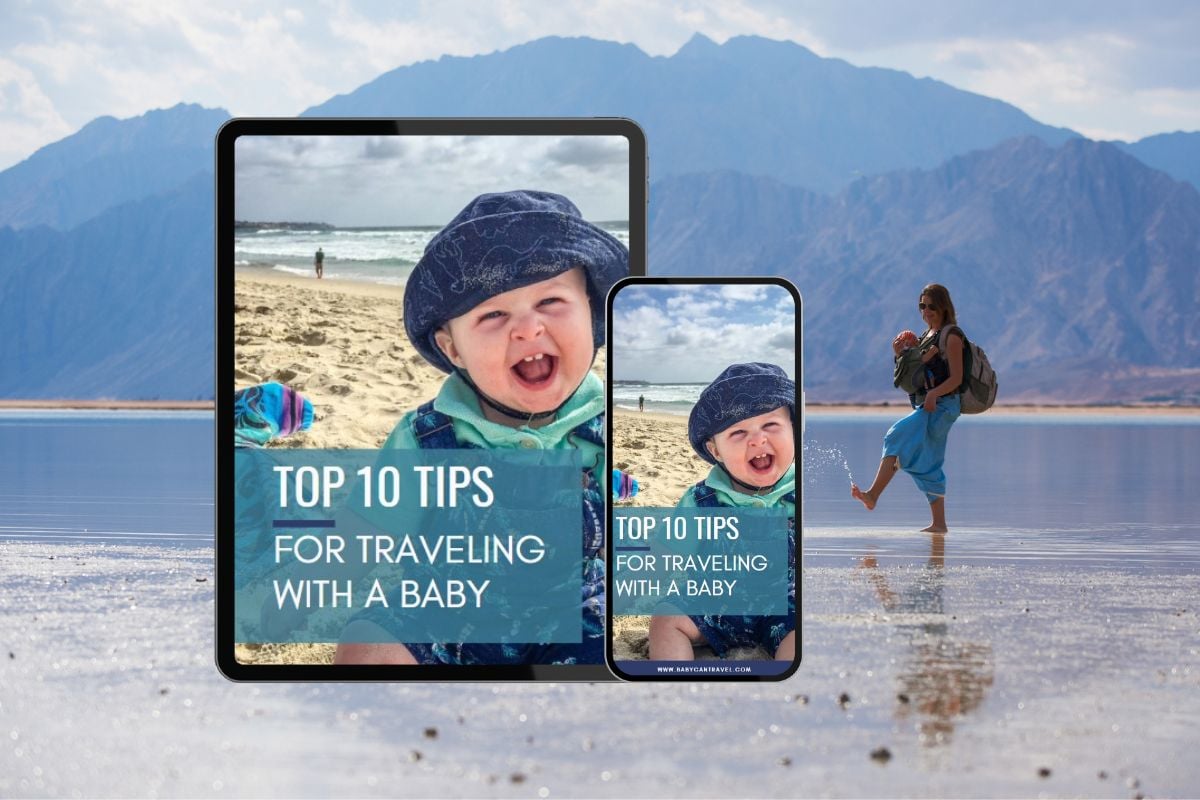